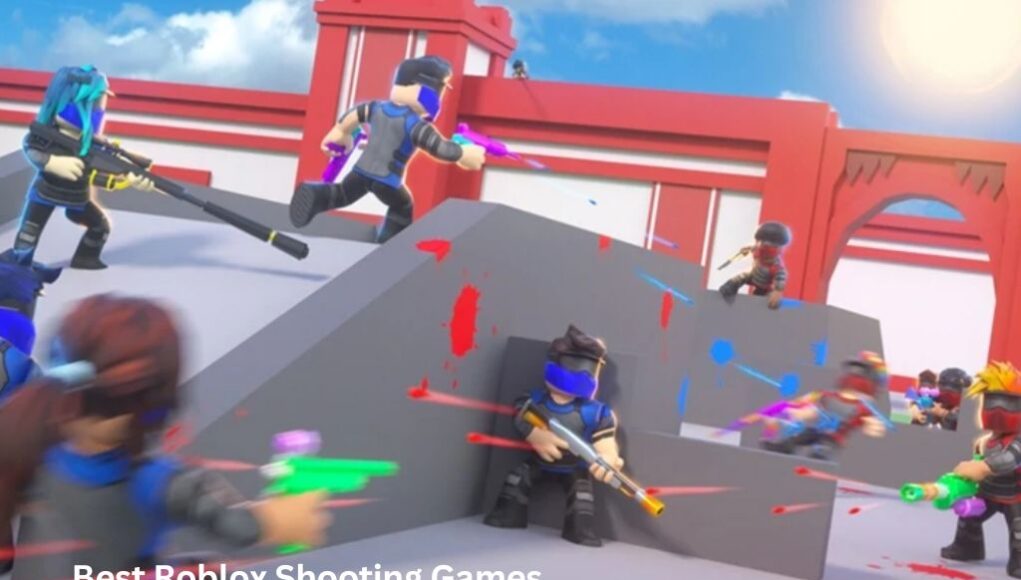 There are a lot of shooters on the market, from AAA games like GTA 6 to competitive games like PUBG Mobile. But what if you could play a variety of shooting games on the same platform? That’s what Roblox gives you with its huge selection of unique games. There are games that are copies of well-known games and games that are completely new. So, it’s time to look at the top 15 best shooting games on Roblox and find the one that’s best for you and your team.

The Best Shooting Games on Roblox

Counter-Blox is, as you might guess, a copy of CS:GO, which is one of the most popular Counter-Strike games. Ten players are split into two teams of five, and each team plays one match against the other. One group has to set off the bomb, and the other group has to take it out, all while trying to kill each other.
Everything about the game is based on CS:GO, from how weapons work to how maps are made and what textures they have. This Roblox shooter’s blocky body is the only thing that makes him stand out.

Battle royale games like Garena Free Fire, Fortnite, and Apex Legends have taken over most of the battle royale market in the past few years. Roblox is in the same situation, which is why we have a copy of Fortnite called Island Royale, which is just as reactive as the original. You’ll find the same ways to use weapons, open cards, and mounts. If you want to switch, don’t forget that there are a lot of cosmetic items that will help you level up.

3. Arsenal is the funniest gun game on Roblox

Even though shooting looks fun, it takes good aim and a lot of practice, especially in games where you have to win. Not in the case of Arsenal. This is one of the few messed-up Roblox shooters that gives you points for being creative. By adding to the way gears work, Arsenal lets you kill enemies with blades, spells, and many other types of weapons. This is a great place to hang out with friends and have fun.

Scale is the most important part of any good shooter, whether you’re playing for fun or to win. If a marksman doesn’t have a scope, he or she quickly falls down the accuracy leaderboards. This Roblox game tests your skills by having you do these things.
Each round gives you a lot of shooters, but, you guessed it, you can’t use scopes on them. The skills that this kind of mechanic needs to have are complicated but also interesting. Who knows, you might be able to record some cool stunts and use the skills you learn in this Roblox game to help you get better at other shooters.

Most Roblox shooters are fun to play on a daily basis, but almost none of them are good reasons to stay. So this is what makes Hood Modded stand out. This is a team game where you have to find people to join your team and move up the server ranks. In addition to shooting, the game gives you the chance to loot and collect weapons.

6. Zombie Uprising is the best zombie shooter game on Roblox

There’s no way to make a list of shooting games without including a zombie shooter, so we didn’t. Zombie Uprising is one of the most popular zombie games on Roblox, and for good reason. It has a huge number of weapons, a lot of different maps, and even upgrades for the weapons you use to kill the zombies. Don’t forget that, unlike other games, it has a special seasonal ranking system and a battle pass. So, there is a reward for killing each zombie.

7. Bad Business is the best FPS game on Roblox

One of the most popular fighting games on Roblox, Bad Business has had more than 340 million visits to its store page. This round-based FPS game moves quickly, and each round is played on a large map with different equipment. Bad Business is the best shooting game you can play on Roblox on your phone. This is because it has a layout for mobile devices that is easy to change. The game fits well with PUBG in terms of real-world experience. So make sure you have some people on your side before you jump in.

This Roblox shooter is a mix of pop culture and combat. The characters, maps, and weapons are all based on well-known movies and TV shows. Shoot Out is mostly about old-fashioned westerns, but you can use almost any fighting style.Everyone calls this Roblox home, from space warriors to samurai. What matters is how well you fight for your place in the world and how well you stand your ground.

Even though almost all Roblox shooters are rated 9+, not all games are good for kids because they have guns and are violent. Happily BIG! Paintball takes this into account and uses paint instead of blood to show where shots were fired.
It is one of the best paintball games and one of the most popular platform shooting games. You get a lot of maps to choose from, a PvP team, and different paintball guns, including a sniper. It’s a great way for people of all ages to work together.

With more than a billion viewers, Phantom Forces is one of the most popular and longest-running shooters on Roblox. It has more than 100 weapons, different game modes, and regular updates to the maps. Also, your weapons have real-world features like different recoil, bullet drop, and changes in balance.
If you’ve never played a Roblox shooter before, you should start with Phantom Forces (no pun intended). Because there are so many players, there are always plenty of enemies to fight. This is great for training and getting to know each other.

Romanowsky Brings a Masterpiece to Life